A new service for the new year …
Here’s a link to a Bulletin Board where you can list your own announcements. Just tell us about the events that you’re planning (a garage sale, a neighbourhood meeting, a political party and lots more!) We’ll list it here for you every week.
Our first announcement is already there.
http://www.neighbourhoodevents.blogspot.com/


New Year’s Reflections
Of course, every New Year is welcomed by a bevy of nostalgic photos and sage commentaries. We’re no different. This week, we have a sampling of Cabbagetown pictures from events throughout 2007, a good year by all standards. 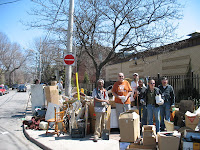 For the second year in a row, our streets and lanes were swept clean in the annual Mayor’s Clean-up Day. Local residents joined the campaign in late April.

The Cabbagetown Short Film & Video Festival became an independent, self-supporting program in 2007 and launched its year with a gala fundraiser on April 29 at the Stonegrill on Winchester.

Early May saw the annual Forsythia Parade and Festival happen in Wellesley Park. It’s a great introduction to Spring in Cabbagetown.

In early June, members of the BIA saluted those businesses who had contributed a unique way to the health of our area. Here, Paul Dineen gives an award to Free The Children as an “Outstanding Success Story” for 2007. 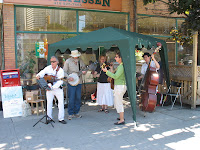 The weekends in June saw musicians appear on Cabbagetown street corners as part of our Music on Parliament Street annual series. Donna Green and the Mo'od Swings appeared beside St Jamestown Deli. 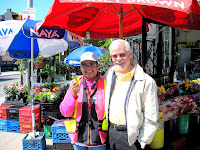 Every year, shops throughout Cabbagetown provide local gardeners with a wide variety of planting choices and, incidentally, decorate the street with their offerings. School children always do what Zena tells them - just ask Ray. 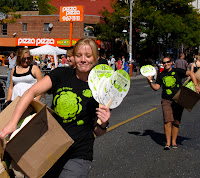 Throughout the summer, Lindsey Reidt worked at the BIA on our special events and our Festival planning.

At the Cabbagetown Festival, the “Cutting of the Cabbage” is a solemn and sacred ceremony. This year, Daniel Clairet from Daniel et Daniel showed everyone else exactly how to do it.


In the early Fall, plans were unveiled for the new building at Parliament and Aberdeen which will combine a retail area and residential apartments above it. 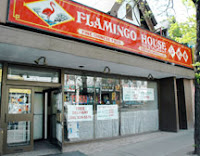 Controversy broke out throughout the Fall when the Salvation Army announced plans to open a church on Parliament Street at the old Flamingo site. Goodwill and frank negotiations eventually settled the issued.

In September, Xtra announced that Cabbagetown was voted “the best neighbourhood to live in” for 2007.

At Christmas, stores across Cabbagetown turned out their best and Santa was warmly welcomed everywhere.

On a wintry night at Valentines, a balmy night on Hallowe’en and another cool evening on New Year’s Eve, people turned out for the parties and enjoyed life to its fullest.