The proposal for the new building at this corner has been released to us. It’s now in the hands of the City of Toronto and the owner expects that public meetings will begin in earnest in January.
This is a major location for all of us in this area. Its fate has been discussed widely for the past two years.
The drawings illustrated here give you a preliminary look at the owner’s ideas. A new, three-storey building will replace the old JavaVille structure. Its first floor will hold commercial or retail space and the top two floors will contain commercial office space.
Whenever opportunities arise for public viewing or discussion of these plans, we will announce them here in the Newsletter. 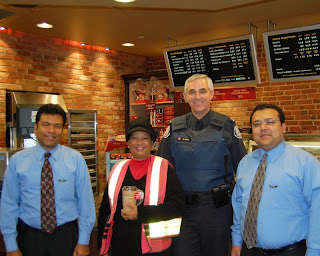 Constable Dave Smith handles the crossing guard program in 51 Division. At his initiative, gift mugs were given to each of the Division’s guards by Tim Hortons as a bit of Christmas cheer and thank-you to them for their work with our children.
Zena works at the intersection at Parliament and Winchester and is well-known and popular in our area.
Our thanks to Tim Hortons for these gifts. Nauman and Amin represent the local group who operate the beautiful store in the Winchester (537 Parliament) and at the gas station (581 Parliament). Tim Hortons regularly supports our community with efforts like this. They support the Cabbagetown Festival and the Short Film & Video Festival as well as many smaller projects in Cabbagetown. 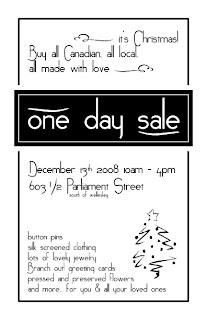 Soup is a cooperative operating from 603.1/2 Parliament. Its members include designers, artists, crafts people and internet experts. On Saturday December 13 from 10 am to 4 pm, they’re hosting a one-day craft sale featuring fine greeting cards (fresh back from One-of-a-Kind), jewellery, buttons and pins, fine handcrafted clothing and lots more. Don’t miss it! 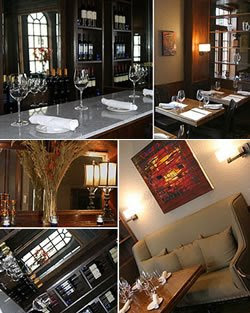 This Tuesday is the big day for JAM's whiskey tasting, From Islands to Highlands. 6:30 pm. (195 Carlton) Bring a gift for the food bank as well and Av Atikian will forward it along. This is a tutored session under the guidance of The Scotch Ambassador from Diaggio Limited. $25 will get you in the door and a chance to taste four single-malt whiskies. Reservations are suggested, (416) 921-1255. 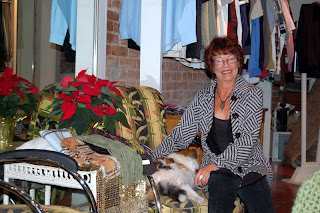 Sharon (here with Jesse) reports that she’s open for the next two weeks on Sunday from 11 am to 4 pm to handle the Christmas rush. Edward Gorey Christmas cards are still in stock. She also has lots of specials available in the store (scarves from $9.99 and samples at 50% below retail). She urges anyone who needs a little Christmas cheer to stop by. (503 Parliament) 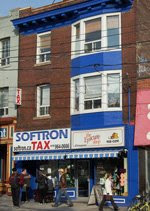 Patty is introducing new cheese dips and spreads and so she’s offering one free tub of Feta Spread with every Cheesy Dip that you buy. It’s a great bargain for anyone who’s Greek (and everyone else who wants to be). From December 12 to 15th, you can save the tax on any purchase of an Epicure Gift Basket. Patty also has 7-to-10 year-old raw milk cheddars from Quebec plus an assortment of shortbreads, gingerbreads and mincemeat tarts. (473 Parliament)

Turkey time St Jamestown Steak & Chops (516 Parliament) is taking orders for your Christmas turkey. When you want to move away from the traditional spread, Mark can give you hams, rack of lamb, beef tenderloin and lots of other fine choices. Janice Williams and Claudia Salzmann are grilling Mark about his choices. 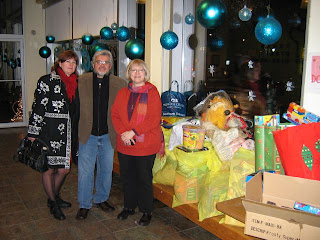 Number 9 Audio & Technologies Group (222 Gerrard) held their 5th annual Christmas party last weekend. Over 100 guests attended and each was asked to donate a toy to be given to the Yonge Street Mission. George Rondina (above - with Cathy Rondina and Anne Keyes of YSM) reports that they collected enough toys to fill a pick-up truck, plus a generous gift certificate for Long & McQuade.

On the horizon…
Cranberries (601 Parliament)...

...is again open on Christmas day. In past years, they’ve offered a real feast and the restaurant has been packed for two sittings. This year, they have extra space with their new facilities and it should be even better. If you want to enjoy a turkey dinner with all the trimmings but don’t want the hassle, make a reservation.

...is getting ready for the annual Christmas sing-a-long with the Sterling Brass. December 21, 2 to 5 pm. Good vibrations.

Into the New Year

Dennison Smith and Matthew Remski from Renaissance Yoga (391 Ontario at Gerrard) have announced their winter programs. Starting on January 7, they’re offering on-going Yoga Asana classes. Fundamentals of Yoga is a twelve-week program available on both Mondays and Wednesdays at 7:30 pm. Every Sunday at 10:30 am, you can drop-in for a Level One Yoga session and on Thursday at 7:30 pm, they hold a drop-in Candlelight Restorative Yoga session. The advanced Yoga Philosophy Program also starts on January 7 (from 7 to 9 pm). You can check their website for details on other programs that begin later in the year: http://www.renaissanceyoga.ca/ 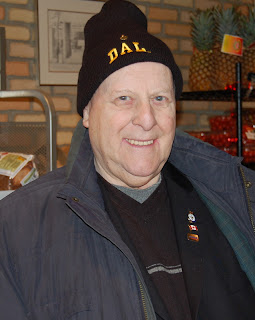 Here’s Rick O’Clee who’s making his regular seasonal visit to Cabbagetown from Ramsgate in England. Rick is father and father-in-law to Laila and John Jay (The Cobourg). He’s a good cook which explains why he was hanging around St Jamestown Steak & Chops and how he developed his friendship with Terry Michelin and now with Mark. Welcome back, Rick and all the best for this Christmas season.
Posted by Cabbagetown BIA at Friday, December 12, 2008