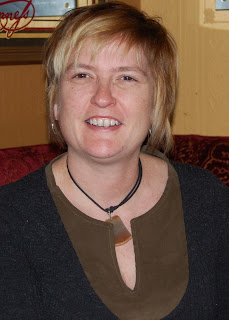 Well Done Tiffany
Tiffany is back after her stint with Habitat for Humanity. Her Cabbagetown friends contributed generously a few weeks ago when she held a fundraiser at The Ben Wicks to finance her travel costs to her project in Guatemala. She reports that her group built a home for a mother and her four daughters and got a good start on a second home as well.

JAMCafe’s February Wine Tasting
On Wednesday, February 25, Av Atikian is hosting another in his monthly wine and food tastings at JAMCafe (195 Carlton). These are now attracting a solid audience – his last one was completely sold out. If the tasting interests you, you’re well advised to make your reservations early.

This month, it’s reds from Tuscany and whites from Niagara, matched to another lovely five-course meal from Av’s kitchen. Each winery is sending a representative: Adriana Avignonesi will tell you about the Capoverso red wines and Cave Spring’s proprietor Tom Pennachetti will talk about his whites.
It’s $90 per person ($10 from this is a gift to The Stop, Community Food Centre.) Call (416) 921-1255.
For a full description of the individual wines and the menu, please click on this link: JAM.

International News
Cabbagetown’s Christopher Dew, in the meantime, is off to warmer climates. He’s taking part in a private fundraising effort (more about that below) by climbing Africa’s highest peak, Mount Kilimanjaro. When he gets there, he plans to unfurl our Cabbagetown Flag as proof of his victory. 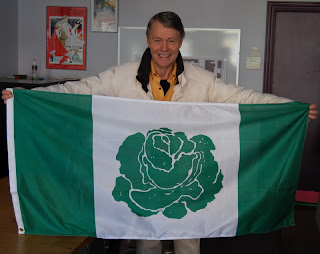 Christopher's "before" picture with the flag. He'll be sending us his mountain-top pic's once he's done.

Great Fundraising Plans
Reports have reached us about two good fundraisers on the March horizon.
Christopher Dew is supporting the Cabbagetown People Project and the Cabbagetown Regent Park Museum with his Mt Kilimanjaro effort. He’s doing this at his own expense and all of the funds that he gets from supporters will go to these two fine projects. You can find out all the details by going to http://www.kiliclimbfundraiser.com/

The new Starbucks will open soon at their location in the building at Aberdeen and Parliament. They’re aiming for March 12. They’re planning to hold a special event during their first day’s business with the proceeds from that event going to help the Cabbagetown Youth Centre. We’ll remind you about this again and give more details as they surface.

Ben Wick’s hosts “Meet the Author”
Robert and David are pleased to invite you to this literary and musical afternoon at the Wicks.

Our two intrepid readers
Carolyn Matthews is the author of “True Stories of Rescue & Survival”, tales about hair-raising rescues at sea, in the forest, on mountains and in the remote Arctic. One chapter describes a cold-case murder mystery set in Vancouver’s upscale streets in 1994. She’ll be accompanied by a live blues jazz band who’ll be helping her to launch her book at The Ben Wicks (424 Parliament) on Sunday, March 1 from 3 to 6pm.
It’s all right in step with the literary tradition that Ben himself started there years ago. For more information, click on this link: Ben Wicks

Busy times at Big Mamma’s Boy
A whole new schedule of events has popped up at Big Mamma’s Boy (554 Parliament). We pay attention here because their evenings are so often really crowded when these specials are offered.

First, you’ll notice regularly now that we’re listing Tuesday comedy nights in our right-hand column. Deb Pearce is hosting comedy/karaoke from 8 to 11 pm. No cover charge. Thanks to Great Lakes Brewery, BMB is able to offer $5 pints.
Then, every Sunday from 3 to 6 pm, there’s a recession-fighting, morale boosting special on shooters at $3 each.
And on the fourth Sunday each month, the Psychic Brunch reappears from 11 am to 3 pm. You’ll get brunch and an insightful look into your future. What’s better? Details are available at this link: Big Mamma’s Boy. 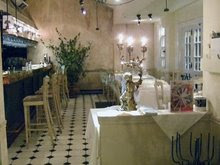 Provence Delices (12 Amelia) has been taking part in Winterlicious 2009 and they’re continuing through to thwe end of the month. You can now enjoy their $20 lunches and $35 dinners until the end of February. Reservations are suggested: (416) 924-9901. To see their full menus and for details about their beautiful restaurant, click here: Provence

It's hard to leave a great vacation
After a nice week-long holiday at beautiful Stokely Creek lodge north of the Soo, it’s back to business here at the BIA. But I can’t resist giving Stokely a last, well-deserved promo – if cross-country skiing in breathtaking northern lakeside scenery is your cup of tea, then click on this Stokely Creek link.
Posted by Cabbagetown BIA at Saturday, February 21, 2009