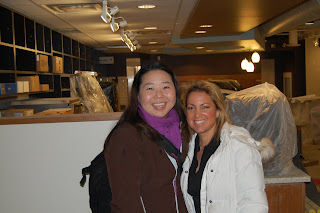 People are asking about progress at Starbucks
Hyojean Parks (on the left with construction site supervisor Julia Drawbell), the manager for the new Starbucks store at Aberdeen and Parliament, dropped into the BIA and gave us a complete update. She’s worked at Starbucks for over 6 years and most recently she’s been the manager at the Bloor and Jarvis store. She’s now getting ready for her new assignment here. She’s been very impressed by the small “village” feel of Cabbagetown and the way that people interact and know each other so well.
She’ll be officially opening on March 12 from 4 to 7 pm with a community event on behalf of the Cabbagetown Youth Centre. All proceeds from this event will go to the CYC.

On Sunday at The Ben Wicks (424 Parliament) from 3 to 6 pm. Author Carolyn Matthews will launch her new book, “True Stories of Rescue & Survival: Canada’s unknown heroes”. 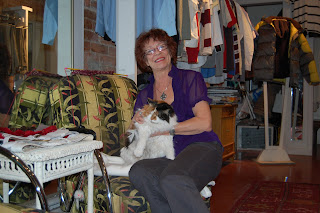 Sharon (503 Parliament) has a new line of environmentally friendly clothing from Canadian designers Neon Buddha and Pure. Whether you want handmade Pure sweaters or accessories or one of Neon Buddha’s collections for travel, work and yoga, all are made from 100% pre-shrunk cotton in both pastels and brilliant gem colours. For a night of salsa and for graduation, there are sassy little dresses in fabulous colours on special at $39.99. And there’s more – dozens of sample belts from $5.99 to $24.99. Sharon wants to remind you that 75% of the store’s inventory is now on sale. So stop by for spring jewels or for Pure sweaters and save.

Commercial façade improvement grants
Just a quick reminder to property owners and business tenants in the BIA that the City of Toronto’s commercial façade improvement grant program has started up for 2009. You can find out how to apply at http://www.toronto.ca/bia/financial_incentive_programs.htm This is a straightforward program where the application takes you through a lot of the steps that you would follow anyway in order to decide how to fix up the front of your building. If you want help with the grant application, call Doug at the BIA at 416-921-0857. 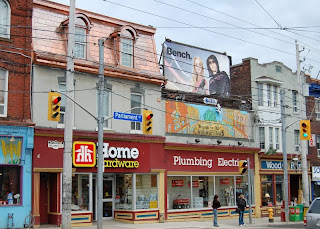 The corner at Carlton and Parliament has a new look as Home Hardware’s impressive renovations are put into place. The upper level copper has been applied and it’s beginning to settle into a nicely aged appearance. New windows have been installed at ground level and the interior cash area has been rearranged. The result is a fresh new look for the whole building. (485 Parliament) 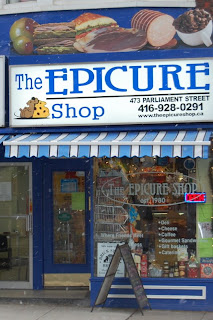 Patty’s got brownies – four varieties to be specific and if you buy one, you can have another at half price. All-natural Brick Street breads are available on Friday and Saturday. As always, she’s got an amazing selection of cheeses including her bestselling La Sauvagine from Quebec and Upper Canada’s artisanal Comfort Cream and Niagara Gold. (473 Parliament)

The sports section
The HOP’s Duncan says it was a magic time that could have gone on forever if the zamboni hadn’t arrived. He’s talking about the two-hour hockey match between The Cobourg (533 Parliament) and House on Parliament (456 Parliament) last week at the Regent Park outdoor rink. A Cobourg observer agreed but said that some people needed regular oxygen boosts to stay in the game. Duncan himself showed sweet hands and lightning speed. John Jay got a game star for being the best dressed player. Nobody is telling anybody the final score.
It’s going to be a weekly event while the ice lasts. But Cobourg better be sharp – Duncan just got new skates. 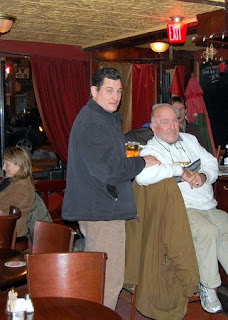 Game pictures will be posted as soon as we get them. In the meantime, we’ll show you Duncan (on the left) as he appears in his natural habitat. 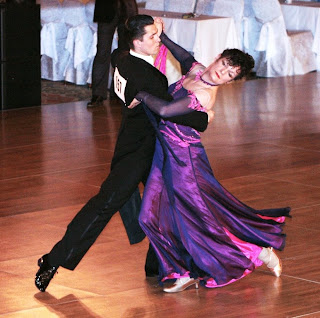 Cabbagetown’s Elise Stanley has just returned from the Classique du Quebec ballroom dancesport competition which is, apparently, the largest such event in Canada. Elise and her partner Chris Sochnacki are the 2009 champions in the Pro/Am Dancesport Series C. Congratulations to Elise and Chris.

Flags are back in stock

Get ready for spring with a new flag from the BIA office (416-921-0857). We’ve just brought in new inventory ($30/ea) and have poles as well for those just getting started ($20). When Spring arrives, you’ll want a fresh new flag to match all the other lovely greenery in your yard. Our flags come from the Flag Shop who’ve asked us to mention that they have lots of decorative flags ideal for homes in our area. Check out their web site at http://www.flagshop.com/

At Big Mamma’s Boy (554 Parliament) – Sunday from 11 am to 3 pm. $40 includes your brunch, a psychic reading and your selection from the gift table.
Posted by Cabbagetown BIA at Friday, February 27, 2009