Friends and neighbours are pitching in …

Many thanks for everyone’s help during the current civic strike. People really seem to understand how hard it is to keep our area clean and they're ready to pitch in with their help when it's needed. George Smitherman and his staff have offered, for example, to put together a volunteer team and attack garbage pile-ups in the neighbourhood.

Richard Silver is organizing a Sunday morning clean-up along Parliament Street. Bring your own brooms and other equipment and he’ll supply biodegradeable bags. Join Richard at Jet Fuel (519 Parliament) at 10 am on Sunday. When you’re finished, John Englar will use his truck to cart the bags to the dump. 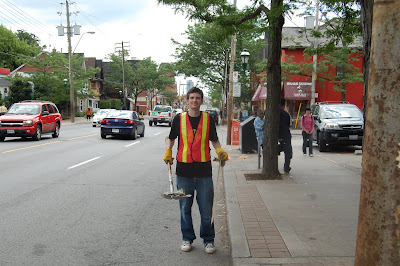 In the meantime, the BIA has hired Matt “Sweeps” McAllister to clean our streets twice a week for the duration of the strike. Sweeps started on Friday and he’s been attacking the big problem areas first. He’ll soon be on top of the worst and then he’ll be able to do smaller litter on the walks and near the curb.

Thanks as well to Don Taggart at Nettleships Paint & Hardware (576 Parliament). He helped us find some equipment that’s making Sweeps' work a lot easier.

When Sweeps has filled his bags, they’ll be taken to the dump by Ryan Taylor from Fair Trade Jewellers, the new store that’s currently under construction at 523 Parliament. Ryan is doing this as a contribution to the international charity, War Child. All of the fees that he’s collecting will be used to help child soldiers who have been rescued from armies and warlords around the world.
Ryan’s project has caught the attention of The Star. They profiled his project at http://www.thestar.com/news/gta/article/658609 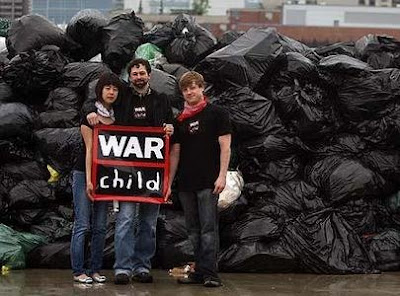 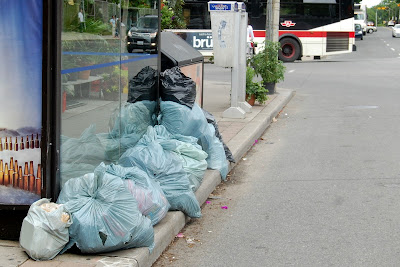 And please, don’t do this. 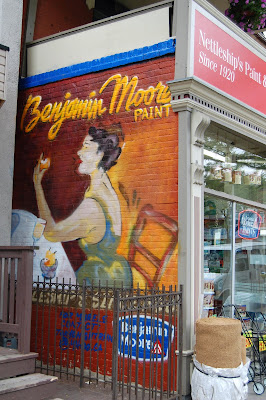 And speaking of Nettleship’s, they’ve just finished a new mural on their small southern wall. If you want more information about the artist, Justin Wilson, you can contact him at tokyonighttrain@yahoo.ca

Johnny G’s gets a facelift A spiffy new coat of paint is just the first step in Johnny G’s renovations. Betty tells us that they’ll soon be sporting a new awning and that new furniture and a paint job will be added to the interior. Their windows and seating arrangements give the restaurant a patio feel that’s very welcome throughout the summer. 478 Parliament.

Welcome to A+ Academy 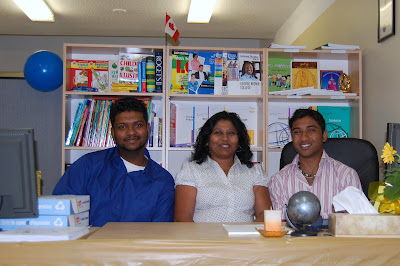 A+ Academy has just opened its doors at 566 Parliament. They’re offering tutoring services in a wide range of academic subjects from kindergarten through high school and they have a variety of music specialties. For more information, call Jeyarajah at (416) 432-7405 or Bridget Susi Antony at (416) 579-3696 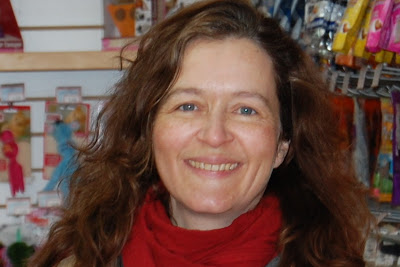 Marilyn from Diggity Dog is back again this Saturday from 11 am to 4 pm at Pet Valu (240 Carlton). She’ll give your pooch a pawdicure (trimming nails) for only $10.

T Shirt time
Once again, we’ve got our signature black and green Tee’s waiting for you. Last year, we sold them to a world-wide audience and our cabbages sprouted up from southern Australia to northern England. Of course, most of them were sold and worn right here and we’re ready to fill your needs again. 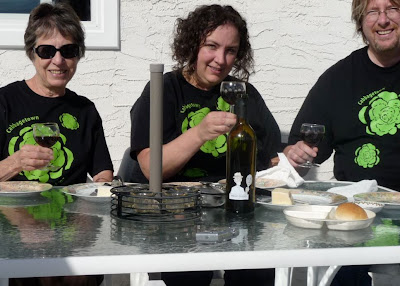 Shirley, Chris and James found that wine in the Okanagan Valley goes down a lot better in a Cabbagetown Tee. Chris is the proud designer of our unique wardrobe item. 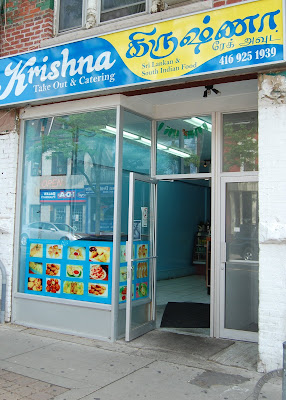 Anyone (like me) who loves curry will welcome the little outlet at Krishna (585 Parliament). For only $6, you can buy a takeout lunch featuring several vegetarian curries and a topping of either chicken or lamb curry, all on a generous bed of rice. $1 gets you three delicious samosas.
Music on Parliament
Our annual springtime series of mini-concerts on Parliament has ended. We had an extra run with six weeks instead of our usual four and that seems like a good idea for the future. 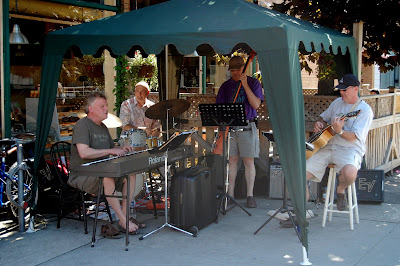 Last Saturday afternoon, we featured jazz favourites from Ian Hamilton (right) and his group at our Winchester area. 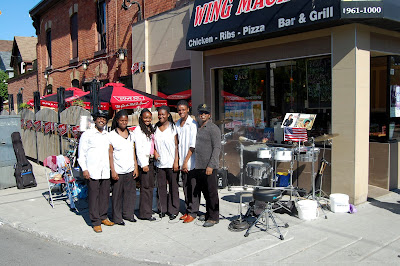 At Spruce and Parliament, Snooky Tynes and his family played a special tribute to Michael Jackson.
Posted by Cabbagetown BIA at Friday, July 03, 2009