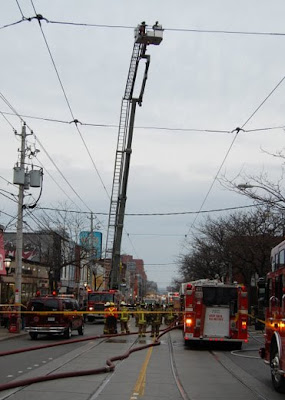 The fire on Parliament Street
On Tuesday, fire erupted in the upper floors in the building housing Grasshopper and House on Parliament (454-458 Parliament). The apartment on the north end seems to have been the centre of the blaze. It has been destroyed. There’s a hole in the roof above this unit, considerable damage to the front window and the interior seems to be blackened and wrecked. Reports so far indicate that some businesses have been damaged.
The House on Parliament reopened the next day and is now back in business, largely because over the years they’ve built an independent electrical system. They also credit David Weenen for helping immediately when trouble started.
Graham Leslie at Capability Brown reports that his hair styling salon is okay but he also needs electrical service. In the meantime, he’s moving to the House of Dumont (200A Carlton) to serve his customers without interruption.
Grasshopper is waiting for final electrical inspections. This could be time consuming. Water came into the Grasshopper’s room but flowed straight through to floor drains without causing a lot of harm.
Superstein suffered some water damage. They’ve moved their clothing inventory out of the building and they need some repairs and electrical service.
For more information and a youtube video, click here: http://www.xtra.ca/public/Toronto/Cabbagetown_gay_business_burnt_in_Tuesdays_blaze-9428.aspx 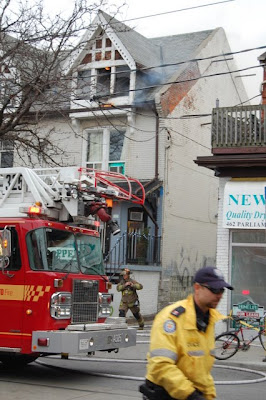 The BIA holds its annual meeting 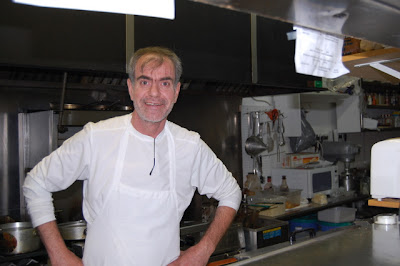 Our 2010 Annual Meeting was held last Wednesday at Athena Restaurant (488 Parliament). Our host, Jimmy, provided finger foods for our members with an emphasis on Greek nibblies. By all reports, they were delicious. This newly renovated room is a nice size for a medium sized gathering and provides both privacy and enough space for a comfortable group. Too bad the evening didn't drag along - we're hearing very good reviews about Jimmy's breakfasts. 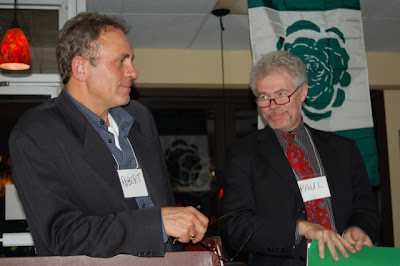 The BIA has passed its 2011 budget. Our 2011 program includes additional street landscaping, a bigger emphasis on Christmas events, our springtime Music program and the 2011 Festival. Keep reading down the page – the full explanations are given below. 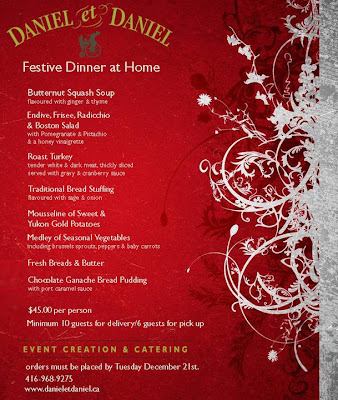 Cabbagetown’s award winning caterer, Daniel et Daniel (248 Carlton),have just announced their plans for their annual festive dinner. You can spend less time in your kitchen this year. Just order a complete meal for your holiday party and your Christmas festivities. Find out more about it, including contact information at Daniel et Daniel’s Facebook page or call (416) 968-9275. 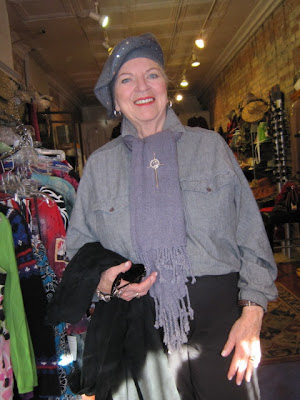 Last week, we told you about Sharon’s new Christmas inventory. She really likes her new sequined berets – modeled here by Barbara Mercer. They’re only $29.95. She also wants us to mention her new line of Christmas jewelry, starting from $15 – earrings, broaches, necklaces and bangles. 503 Parliament 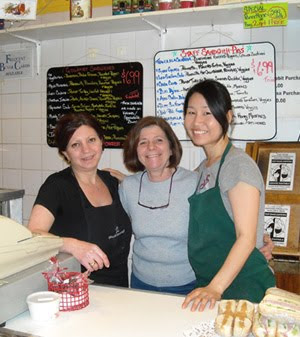 It seems that we regularly notify you about another new line of cheese being offered at Epicure. Patty really knows how to find delicious new brands. This week she has Cape Vessy grand champion goat cheese from Fifth Town Artisan Cheese in Prince Edward County. And from Bothwell, a BC producer, she has maple smoked 2-year old cheddar. She’s inviting you into the store over the weekend to try some samples. 473 Parliament.

Buy a brick and fix up the park

Randy Brown and the group at Cabbagetown Art & Crafts have an ingenious idea for improving Riverdale Park. They’re selling bricks to place in the walkways. Buy a brick to put into the new sidewalk and your name will appear on it as a valued donor to the project. You can also make a lasting Christmas gift – buy one dedicated to your family or friends. The group has donated $5000 to get the ball rolling. For $100, you can have your names engraved on two lines. For $150, you get four lines. To get more information and to donate, contact Randy at cabbagetowncraft@aol.com. 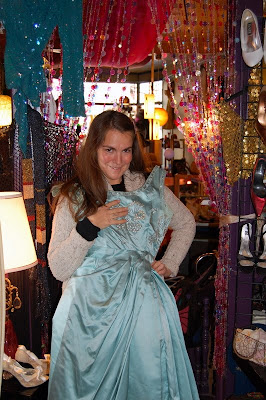 Michelle has just acquired some wonderfully vintage clothing, shoes and jewelry. Since she has so much inventory, she’s opening on Mondays as well. Check out Foxy on Facebook for pictures and details. 251 Gerrard. 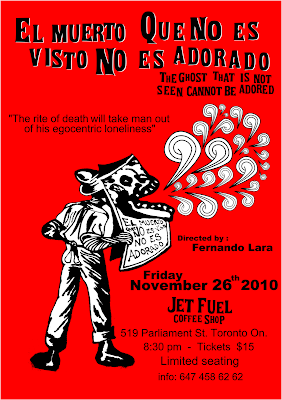 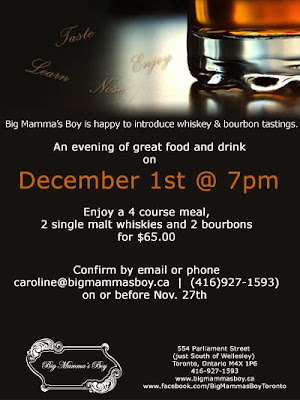 Caroline has announced her plans for her first whiskey tasting, happening on Wednesday December 1. Please reserve before November 27 at (416) 927-1593 or at caroline@bigmammasboy.ca There’s a four-course meal plus 2 whiskeys and 2 bourbons for your tasting, $65. 554 Parliament. 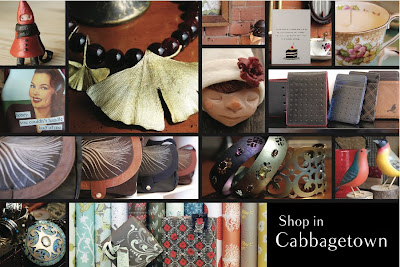 Regina has lots of new arrivals for your Christmas needs. Come into her store and check it out. 242 Carlton. 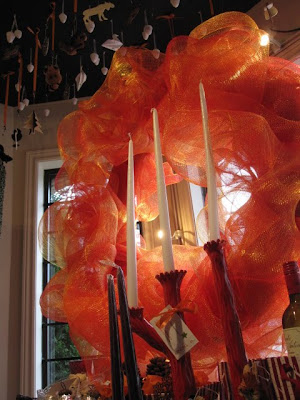 Kendall Williams has designed a brilliant orange wreath to hang in the window at his marvelous shop. A collection of festive ornaments surrounds the wreath – evergreen trees, silver mistletoe, forest critters, mercury glass acorns and origami cranes made from fine bone china. Visit the store for lots more – 438 Parliament across from Spruce.

Details about our BIA’s plans for 2011

Parliament Street landscaping
This is very expensive stuff. It works best when we can do it in a partnership. A lot of the new plans are very exciting. 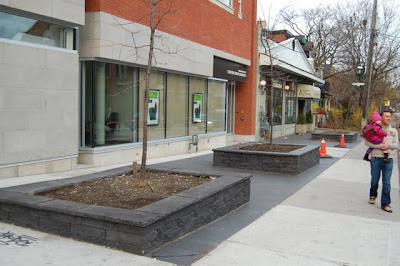 The northeast corner at Carlton is a good example. In 2010, we worked with George Foulides, the developer of the new bank building, and with the City of Toronto. You can see the new stonework on the boulevard and the new planter boxes and trees. In the next few months, we’ll add finishing touches with a bike rack and decorative lights. In the spring, we’ll plant lots of flowers in the boxes. As the trees mature, this corner should grow into a softer, comfortable spot. In 2011, we’ll continue on the south side of Carlton. More trees, planters and new stonework will give this side a finished look as well. 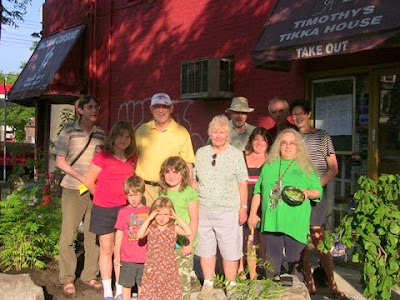 In 2010, we were partners in two other gardens. The residents at Prospect Street designed and planted a garden at Prospect and Parliament. Next year, it’ll have lots of daffodils and annuals as well as the new perennials that have already been planted. The BIA supports this financially. 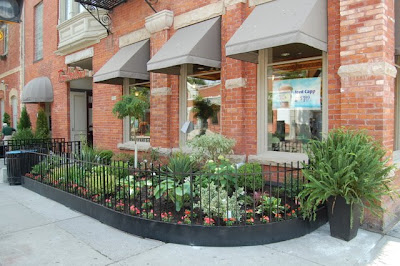 John Bernardo, the owner of the Winchester building, planted a neat little garden on the sidewalk at the corner of Winchester and Parliament. It’s a lovely highlight at that location. The BIA made a financial contribution to John’s initiative.
In 2011, the north side of Winchester will be refreshed under the sponsorship of the Don Vale Cabbagetown Residents Association and the City of Toronto. The pavement will match the Carlton Street boulevards. New trees will replace the dead ones there now. The BIA will contribute a bike rack and we’ve asked the City to add a garbage container. We’ve also asked that a flat area be built near the corner to provide “scooter” parking so people visiting the coffee shops have a place to leave their vehicles instead of blocking the sidewalks – a major irritant currently. 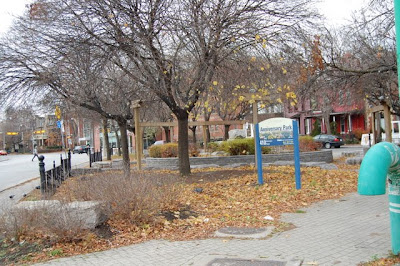 Anniversary Park has long been an eyesore. We’ve put a small amount of money aside to begin planning how it can be fixed. We know that Pam McConnell will support this initiative. The Daniels Corporation and the Yonge Street Mission are also very interested. We’d love to create a much more attractive, useful park and a gateway into this part of our community.

Flower pots on the street poles 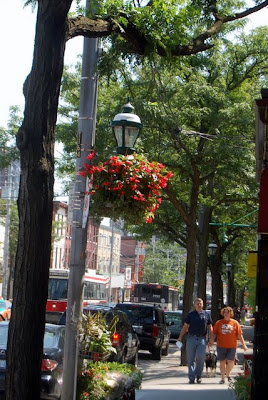 Both Toronto Hydro and the TTC have been tough to deal with. In 2009, we put up our first 30 flower pots. They were lovely. We had plans to expand this to 60 the next year. In 2010, Toronto Hydro went into some kind of bureaucratic spasm and stopped us dead in our tracks. Now the TTC is piling on.
We aren’t going to quit. Both the TTC and Toronto Hydro have wires and poles along our streets that drag down our efforts to beautify the place. The flowers offset that ugliness. We’re going to keep pushing because we think this is the best for our community.
A quick aside. The BIA Minutes from the BIA meeting for June 18, 1975 (yes – 1975!) list some streetscape improvements for the area. Point 7 says “overhead wiring such as hydro lines should be placed underground.” Groan. 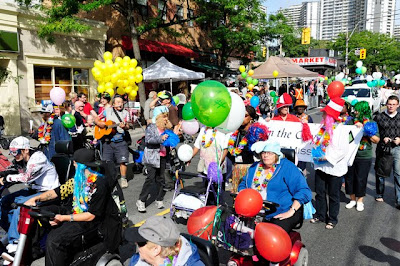 In recent years, it’s been expanding. Our attendance is growing, our street vendors are more attractive and the entertainment and food are exceptional.
We have several plans in the works.
The parade should be a bigger event, marching from the Distillery north to Cabbagetown.
We’re going to continue the dog shows and art exhibits on Carlton Street.
We want more vendors who emphasize the arts and crafts.
We need a bigger area for kids to have some fun.
We want to use the internet more aggressively to promote the weekend.
We want to expand opportunities for local entertainers and for groups from Regent Park, St Jamestown and Cabbagetown.
All of this is incredibly expensive. The costs can be mind boggling. So we’re expanding our fundraising efforts. 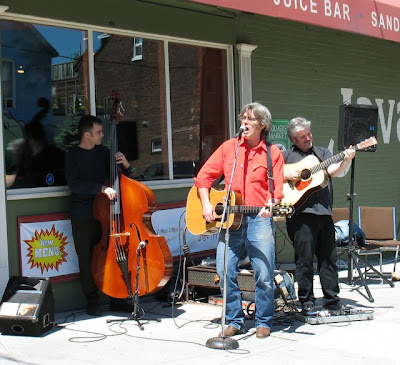 Our Music on Parliament program works well. In 2011, we’ll expand to Gerrard Street and also return to Carlton.
We hope to revamp our web site and to use the internet more aggressively.
We want to add new decorations for the street for the Christmas holiday period.
If possible, we’ll add a community information kiosk at Gerrard and Ontario.
Posted by Cabbagetown BIA at Friday, November 19, 2010