Festival warm-ups
It’s one short week until the Cabbagetown Festival arrives in our neighbourhood. Here are a few late-breaking stories for you.

If it’s in the newspaper, then it’s gotta be true! So here’s an article by Justin Skinner at the City Centre Mirror: http://www.insidetoronto.ca/News/Centre/article/54798
Thanks, Justin, for your great preview.

Watch for your programs
Program booklets along with special announcements from The Short Film & Video Festival, the Regent Park Home Grown Stage and The Union are all on their way to your homes.
In 2008 as well, we’re experimenting with subway advertising. The feedback is great. 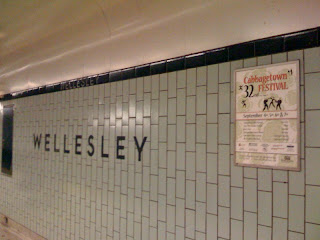 We’ve placed our posters in several downtown stations and on cars throughout the system.

Friday night’s Film Festival
The Cabbagetown Short Film & Video Festival is in its 17th year. Their motto, “films from around the world and around the corner”, really is true this year. The 2008 program includes short films from Regent Park, Winnipeg, Germany, England, Iraq and Iran. Tickets are available at 237 Carlton or from 7 pm on Friday, September 5 at the door: $10, Winchester Dance Theatre, 80 Winchester St.
After the show, Cabbagetown's finest are gathering for a few sips at The Cobourg (533 Parliament).

T-Shirts go international
Last week, Sue Giles, a charming woman from Adelaide Australia, dropped into our Festival HQ to get a few details about Cabbagetown. She’s an urban planner who’s on a special visit to Toronto to look at neighbourhoods like ours and learn why we work and live together so well. 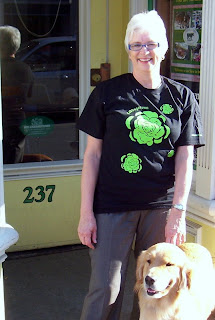 One quick look at our T-shirt and she bought her own. (Obviously, a decisive person who knows a great bargain when she sees it.) As you can tell, even our T-shirt mascot (Willie) thinks she’s made a wise choice.
You can get your own personal version of this international sensation by calling Doug at (416) 921-0857 or by visiting 237 Carlton Street. $10.

Madannathon and Abbalicious
Thanks to Calvin, Michael, Charlene and Sarah, we’re going to renew a beloved event at our 2008 Festival – the Carlton Street dance.
When: Saturday, September 6, 3 pm
Where: Carlton St near Brass Taps (221 Carlton) and Piccolo (226 Carlton)
Who: a special DJ from Brass Taps
What: an hour-long “shake your bootie and squeeze your sweetie” dance-a-thon celebrating those great cultural icons, Madonna and Abba.
It’s going to cost you $5 and 100% of the ticket revenues are going to the Cabbagetown Community Arts Centre (454 Parliament). 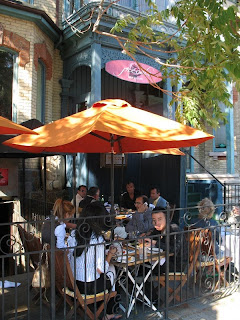 From dawn to dusk
Both St Jamestown Deli (516 Parliament) and Epicure Shop (473 Parliament) have barbeques and bacon sandwiches.
HomeLife/Realty One (501 Parliament) offers hot dogs at noon for as long as they last.

Parliament south of Carlton
This area is going to be alive during this year’s Festival.
Once again, Go Freddie Go will be appearing on Saturday afternoon at the House on Parliament (456 Parliament). 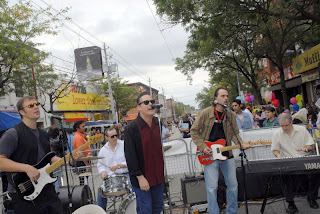 They always bring big crowds to fill the HOP patio.
Next door, the CCAC will feature Snooky Tynes in the late afternoon.
Across the street, the Wing Machine (443 Parliament) is bringing out burgers, wings and other bbq delights.
At 6 pm, the Ben Wicks (424 Parliament) presents its annual pig roast, another popular sensation that fills the room.
The Regent Park Home Grown Stage is just south of the Ben Wicks. 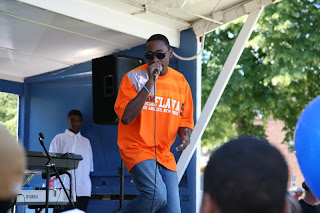 All afternoon, young singers, dancers and performers from Regent Park will be appearing. They’ll be joined by the St Jamestown Youth Centre Steel Pan Orchestra – an outstanding group of young musicians who are fresh from successful appearances at Caribana.
The Yonge Street Mission festival party occupies Anniversary Park from noon to 5 pm. This year, they have games, jumping castles, a barbeque and lots of other family activities.
Posted by Cabbagetown BIA at Friday, August 29, 2008